The Flock is another band that gained international notoriety, beginning their career in Chicago and performing at the Pop House along the way.  Unfortunately, I don’t think I was in the audience that night.  (However, I did eventually buy their LP’s “The Flock” and “Dinosaur Swamps.”  As I wrote this post, I was listening to a CD compilation, ”Flock Rock: The Best of the Flock.”)

**UPDATE** Through the help of comments from Tom Wolter, the members of this 1966 version of The Flock have been identified.  They are, left-to-right:  Fred Glickstein (guitar, organ, trumpet, vocal),  Rick Canoff (sax, vocal)  Ron Karpman (drums, vocals),  Ricky Mann (guitar, backup vocal), Jerry Smith (bass, backup vocal).   In 1967 they added Tom Webb (sax) and Frank Posa (trumpet).  By 1969, Ricky Mann had been replaced by Jerry Goodman (violin, guitar).  John Gerber (sax, flute, banjo) replaced Tom Webb, who didnât want to tour Europe. Webb stayed active with the band, recording and writing songs.  He just didnât tour.  Tom Wolter adds that at the time of this photo, Jerry Goodman may have been a roadie with the band before joining.  Thanks, Tom, for providing the update.

Here’s more background info… Early on, Rick Canoff and Fred Glickstein had a garage band called the Exclusives in 1965 when they decided to rename themselves the Flock. The Flock recorded some successful independent singles (e.g. Take Me Back) over the next couple of years, during which time they performed at the Pop House.  The Flock really took off after virtuoso violinist Jerry Goodman joined the band.  Their distinctive jazz-rock sound began to take shape and flourish. 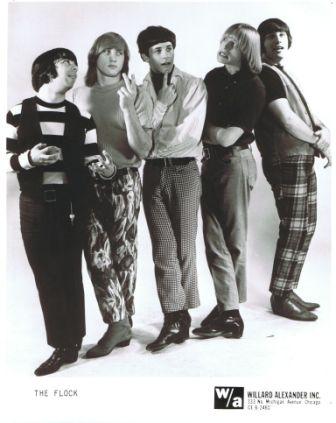 15 Responses to “The Flock”