Had the opportunity to interview Dana Buck (bass) and Brad Palmer (guitar/kybds) of The Esquires.  Dana and Brad fondly remembered those days of performing at the Pop House, noting that George always offered them burgers and malts after the gigs.  Dana still resides in Illinois and works in a Rockford band called The Sensations when he’s not busy as account manager for Crown USA.  Brad works in the health field as an RN in Wisconsin and also performs with a band called Abby Normal in Portage.  Dana’s twin brother Dave (drums) lives in Canada.  The whereabouts of Tom Harrison (guitar) is unknown.  I’ll be featuring more on The Esquires in my book. 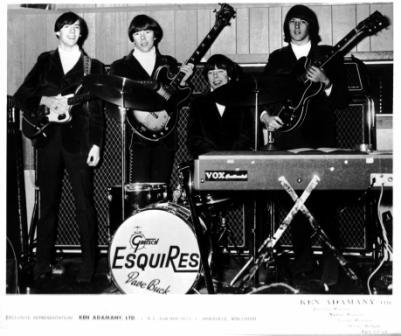 6 Responses to “More on The Esquires…”